What type of fire extinguisher do I need for an electrical fire?

Excluding those that are started deliberately, it’s estimated that over half of domestic fires are caused in one way or another by electricity, whether it’s because of overloaded sockets and extension leads, frayed cables and wires, cheap or badly located phone or laptop chargers, or old white goods.

Electrical fires are also common in the workplace and are similarly often caused by carelessness or a failure or malfunction in equipment or machinery. This latter cause is why all electrical equipment used in the workplace needs to be subject to regular ‘portable appliance testing’ (PAT) to ensure it is safe for use.

Obviously, it’s sensible to know the best ways of avoiding electrical fires, but should the worst happen you also need to know how to put them out. The first and most important thing to remember is that you should never try to use water to put out an electrical fire – because water conducts electricity, you’ll just end up spreading the fire to other flammable items in the area and in all likelihood electrocuting yourself and probably anyone else in the vicinity as well. 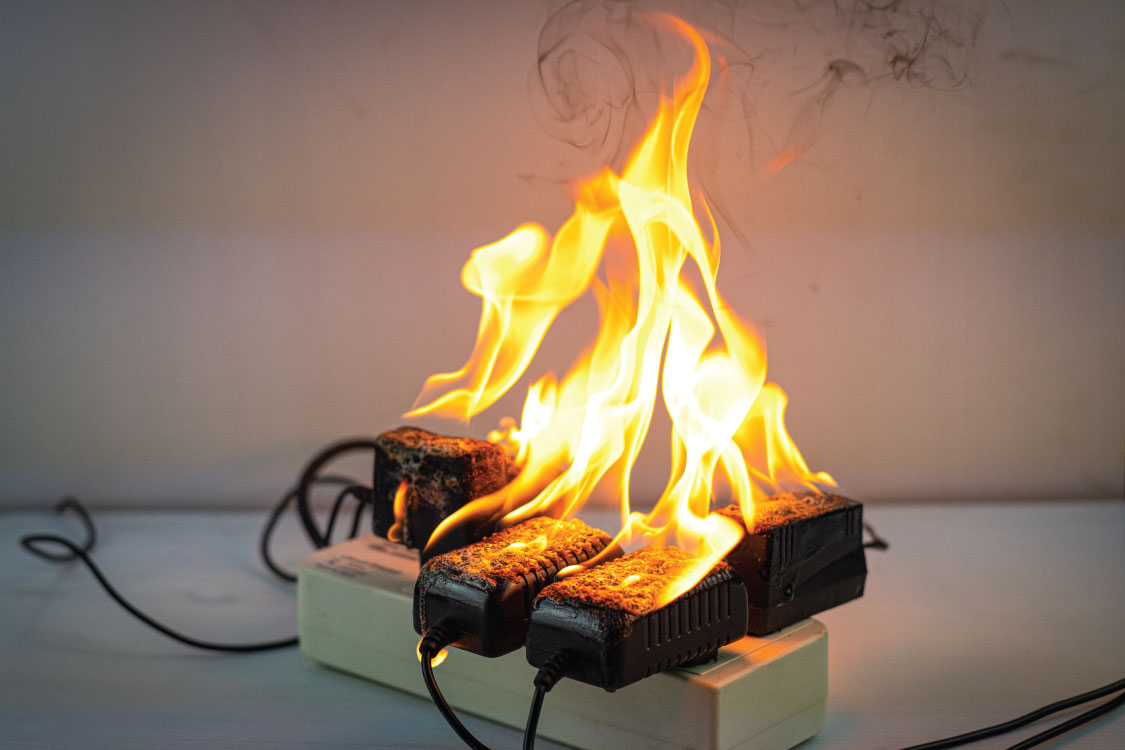 Which fire extinguisher is used for electrical fires?

If you’re faced with an electrical fire in a workplace situation, there may well be a number of different fire extinguishers around, each of which is to be used for different types of fire.

Electrical fires should always be tackled with a CO2 extinguisher, which acts by smothering the fire with carbon dioxide and cutting off the oxygen that would otherwise feed the fire and cause it to spread. That means that this type of fire extinguisher is also suitable for use on flammable liquids, such as petrol and paraffin.

Because of the way it works and the nature of the carbon dioxide itself, these extinguishers should only be used on indoor fires. If you try to use them outside, then even the slightest breeze will disperse the gas into the air and make it entirely ineffective.

CO2 fire extinguishers are easily identified by their black label and hose and are usually left close to fire risks or to fire doors in rooms with electrical appliances and equipment.

Not many homes keep a selection of fire extinguishers to hand, but there are still ways to safely tackle a small electrical fire. The first thing is to unplug the device in question if it is safe to do so. The best way to put it out is to smother it with baking soda (aka bicarbonate of soda), which essentially contains the same chemicals as a CO2 extinguisher.

Naturally, few homes are likely to contain large enough quantities of baking soda for anything other than a very small fire. An alternative is to use a heavy blanket, which will also cut off oxygen to the fire. However, it needs to be placed carefully enough to cover the whole fire without putting yourself at risk while doing so – don’t just throw it in the general direction, because you’ll probably just end up setting fire to it as well.

For all your fire safety needs around Chester and Warrington, Cheshire Fire offers comprehensive fire risk assessment and can supply all kinds of fire extinguishers, including those suitable for electrical fires, together with ongoing maintenance. Contact us today to find out more.